After a recent trip to Northern Ireland I ended up with aÂ Bank of Ulster five pound note. In N.I. a visitor needs to be careful which cash machin 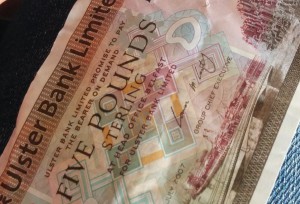 es they use. Some dish out Bank of England notes; others issue local banknotes. They have the same value, but try using an N.I. note in England and you’re out of luck: They’re rarely accepted.

At uni, a Scottish friend would regularly get himself in a bit of a trouble by walking into shops (in Southampton) and trying to spend Scottish banknotes. On refusal, he would argue thatÂ they’re legal tender – so should be acceptable in England. He never got very far.

Now, with a banknote from Northern Ireland in hand, I wondered whether these notes are indeed valid for use in England.

It turns out that no, they’re not. As far as I can tell, legal tender is a very specific description which refers to the ability to use certain assets in repayment of debt. If you end up with a debt of some kind, you can use legal tender to settle the debt and the recipient (the debtor) cannot refuse.

With this in mind, my friend at the shop has two issues.Â First, there is no debt to settle. The shop can simply refuse to exchange the goods for the money so anyÂ legal tender argument is irrelevant,Â since there’s no debt. They can easily turn him away.

Restaurants are a slightly different matter. If you eat your meal then pay afterwards, a debt has been created (you certainly owe them for the meal) so my understanding is they would be obliged to accept legal tender.

On to the second point. Scottish banknotes won’t work anyway since they’re not legal tender in England. In fact, it turns out they’re not even legal tender in Scotland. There are specific combinations of coins and notes which are valid in each country:

In Scotland, only coins are valid legal tender. Scottish banknotes have no legal tender status anywhere. As far as I can tell, this is also true for N.I.-issued notes.

In England and Wales, banknotes issued by the Bank of England are legal tender (provided they’re current – old notes are no longer valid). You can settle any debt with banknotes.

Coins are legal tender throughout the whole United Kingdom, although there are restrictions. You can only settle a debt up to Â£5 if you only have 10p coins, for instance.

Legal tender is a very specific definition, andÂ seems to be the subject of misunderstanding. My Bank of Ulster five pound note means very little in England, butÂ the novelty of having it hasn’t worn off yet, so I’ll be keeping it for now.

As always, I am not a lawyer, currency expert or accountant so check with a pro before you attempt to settle your debts… 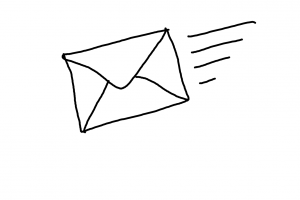 A friend emailed me the other day to ask why their hosting company have announced they will stop forwarding.

Roughly speaking, they have an email address joe@customdomain.com which is hosted by said company. This forwards to their Gmail address joespersonalaccount@gmail.com [these are, if you hadn’t guessed, not their real emails].

The company has stated that they will no longer allow forwarding of emails from the custom domain to an external server.Â Why? my friend asked. It is, after all, a quite normal thing to do with domains.

As far as I can tell – it looks like the reason is down to the way popular mail services filter spam. Google’s GMail, for example, uses a thing called SPF. This is a mechanism that checks whether emails came from a legitimate source.

Let’s say bob@bigcorp.com is sending my friend Joe an email, but they use his Gmail account directly – this is the simplest path:

1. Bob writes the email and sends it. The mail server at bigcorp.com looks up the mail server handling Gmail.com accounts and connects to it.

2. The mail server at Gmail.com receives the email and puts it in Joe’s inbox.

Now, the mail server at Gmail.com is applying SPF. This looks up the public record for bigcorp.com to see which mail servers have authority to send from that address. The mail server that sent the mail to Gmail is indeed legitimate, so it’s allowed through.

Now, Bob sends another email, this time to joe@customdomain.com

1. Bob writes the email. The bigcorp mail server looks up customdomain.com, finds its mail server and connects to it.

3. The gmail.com mail server receives the email and puts it in Joe’s inbox.

So, same as last time, the gmail.com server applies SPF. However, this email didn’t come directly from bigcorp.com, it came via customdomain.com. This isn’t on bigcorp’s list of authorised servers, so as far as Gmail is concerned this email could have been forged. It’s quite possible the email will end up in the junk folder.

Worse still, if lots of emails come via customdomain.com Gmail might start thinking the entire domain is spammy. This is partly why I suspect the hosting company want to avoid forwarding. Ending up on spam blacklists is a costly, damaging affair.

This might appear like a weakness of SPF, but there is a fairly reasonable solution to this. I use Google Apps for Work (i.e. I pay for Gmail) and as part of my configuration I can tell Gmail which mail servers are trustworthy.

If Joe did this, he would add his mail server for customdomain.com to the trusted list. Now, when Gmail checks where an email is coming from it will see that customdomain.com is a trusted server, so will look further up the history to the previous mail server. In this case it’ll be bigcorp.com, which is valid, and the mail will be allowed through.

Unfortunately I’m not sure this is available on the freebie Gmail server, nor whether other services support it.

The hosting company didn’t give their reasons for limiting the feature, but this seems like a pretty likely (and logical) reason.

Sidenote: there’s also a bitÂ on Wikipedia about rewriting the envelope sender. Looks a little hacky, but might be a viable alternative for those without whitelisting.