After earlier work with DATETIME and indexes, I am still seeing some performance issues with storing logs with a full timestamp. Since a lot of the reporting is based on day-on-day and week-on-week comparisons, it could be more efficient to store the date and time components separately.

For my purposes, I’m using time to a resolution of about 15 minutes so there’s no real need to suffer the extra storage and performance overhead of working with a TIME field.

Instead, I’ve opted for a TINYINT with a value between 0-95 inclusive – one for every fifteen minutes of the day. Naturally, this is indexed.

The issue comes with how to convert time into these segments, and back again. Logically, 00:00 to 00:15 should beÂ the first segment, butÂ I have to be careful when reporting this back.

In this case, I suspect simplicity prevails. Most normal people (i.e. not me) would be more comfortable seeing nice round numbers: 00:00, 00:15 and so on. Seeing 00:07:30, 00:22:30 and so on is likely to be unnecessarily confusing. Thankfully the incoming quality of data is not that precise, so nobody will scrutinise this.

Some movies I’ve watched recently (and not so recently,Â but recording for sake of reminder)

Captain Phillips
Inspired by an incident in 2009, this film follows the captain of the Maersk Alabama during a hijacking and subsequent hostage-taking. Great movie, very well portrayed. Highly recommended.

Hologram for the King
Another Tom Hanks film. This one’s a bit more laid-back and tells the story of a depressed, washed-up salesman in Saudi ArabiaÂ trying to sell a videoconferencing system to theÂ government. Mostly enjoyable with light-hearted humour, but fairly slow-paced.

Sausage Party
Finally got round to watching this on New Year’s Eve. Very rude, crude and immature, but certainly not for kids. Entertaining enough, but I’m glad we waited for the price to drop before renting.

The Lobster
I saw this a few months ago on Netflix but worth remembering. Colin Farrell is wonderful in this odd, dark comedy about a hotel of sorts for helping people to find life partners in a world where – if you remain single – you turn into an animal. Bizarre, odd, and certainly not to everybody’s tastes, but I enjoyed it.

Fargo
Dark comedy set in Minnesota about a small town murder mystery and the people involved in it. A fair chunk of this movie is about theÂ location and theÂ relaxed nature of its population. Fun,Â quirky and I’m interested in seeingÂ the TV series. On the other hand, it’s very slow-paced.

Tallulah
Appeared on Netflix a few months ago, so weÂ gave it a watch. Decent enough movie and storyline with Ellen Page and Allison Janney. Warm, well-paced and interesting characters.

Austenland
Keri Russell is the American girlÂ looking for an authentic ‘Jane Austen” experience in an immersive themed vacation in England. I chose this from Netflix on a lazy day with low expectations. It wasn’t great, butÂ enjoyable enough.

Pride & Prejudice & Zombies
Somehow I thought this would be a good idea immediately after Austenland. Stopped it after about fifteen minutes. Maybe we’ll try again but it’s as silly as it sounds, andÂ wasn’t particularly engaging either.

Suicide Squad
Rambling and jumpy storyline, with no real background and character development. Good enough for some mindless action, but nothing captivating. On the plus side, soundtrack was great.

London has Fallen
Gerard Butler saves the day again as London falls to a series of attacks. Lots of luck seems to help as well, but for mindless action thisÂ ticks all the boxes.

The Martian
Matt Damon recreatesÂ The Good Life in space, after his fellow crew members leave him on Mars following a tragic accident. Enjoyable and witty.

Independence Day: Resurgence
It’s hard to critique an alien movie for being unrealistic, but this movie manages it with a frankly stupid plot.Â Will Smith added a charismatic element to the first film, which is sorely missing here.

The Secret Life of Pets
Annoying voiced creatures in a forgettable storyline. Watch the trailerÂ to see all the funny bits.

Edge of Tomorrow
Tom Cruise and Emily Blunt on repeat. Quite a lot of fun. I enjoyed it.

You will need the ARC Welder app from Chrome Web Store. I had to download thisÂ twice for it to work. The first download was large (120Mb), presumably the runtime, and didn’t seem to install properly. On the second attempt it was a more modest 12Mb, and then worked fine.

When launched, the app requires an Android APK (packaged app) to work. I’ve been playing with a traffic management game in development called Traffic Lanes 3. The author publishes APKs as they continueÂ to grow the game,Â which is perfect here.

As it happens, I find the editor tools on this game a bit fiddly on a tablet, and prefer a mouse. The developer has stated they have no plans to produce a desktop version, and franklyÂ if ARC WelderÂ continues to cover this gap there seems little point. 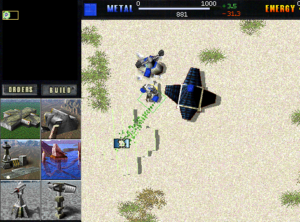 TAUCP comes as an executable installer. Run the installer and let it install to the default location (probably c:\cavedog\totala).

Next, open Windows Explorer and go to that location. Copy all the installed files (which will include a whole bunch of folders, ai, gamedata, maps, etc.)

Go to C:\Program files (x86)\Steam\steamapps\common\Total Annihilation\ and copy the files into there.

I got one prompt, which was to overwrite rev31.gp3, andÂ allowed this to overwrite. This file enables theÂ mod.

Now, when you launch Total Annihilation, the new mod kit should be active with new units in various factories.