Situation: I have created a new Twitter account for a business I am managing. Twitter wants to verify the email address I’ve used, so I get an email asking me to click a link.

I am using my mobile phone. It’s a Nexus 4 – new and fast, with a full-featured browser on board.

I tap the link on my phone, and after a few redirects I end up at this page: 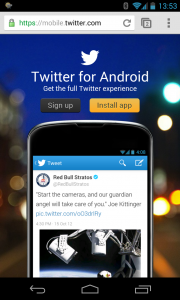 Note the URL – it’s simply mobile.twitter.com. The validation code provided in the email has been stripped. No matter what I click, I can’t succeed. Worse, this page bears absolutely no resemblance to what I was hoping or expecting to get. I don’t want the app and I’ve already signed up (it also doesn’t scroll – there’s nothing below the screen fold).

So, it seems I cannot validate my email address from a mobile phone. Or Twitter doesn’t want me to. Either way, I can’t perform a quite straightforward task.

You might be aware that in Chrome there is an option ‘Request Desktop Site’ which re-requests the page but pretends the phone is a desktop. Unsurprisingly, the full-featured Twitter homepage is reloaded. Unfortunately Chrome doesn’t retain this setting between tabs so simply going back and re-tapping the email doesn’t work. You need to copy/paste the URL into the current tab.

With that little dance, it works. My email is validated.

Of course, it always should have worked. This is a trivial exercise and the modern smartphone is more than capable of this activity. Instead, the website operator insists on using a brutal, unhelpful redirect. What an utterly poor experience for such a simple task.

Some of my more recent reads…

Those whose data is not easily harvestable risk being a ‘New Underclass of Big Data’ – the theory being that people who are paid in cash, don’t have Internet access and mobile phones will not be represented fairly when Big Data is used to profile populations.

A small team at Google has created a basic web server for the Raspberry Pi, designed to help people learn to code more quickly and easily.

Finally, ‘The best interface is no interface’ – this article from last year still resonates quite strongly with how I feel about technology at the moment. Well worth a read.

My collection of notes around the Internet. I’m using a Model B with a Raspberry Pi camera and an up-to-date Raspbian.

Then I made the following changes to motion-mmalcam.conf:

ffmpeg_output_movies from on to off because I don’t want movies

I have a new phone (actually, an end-of-line one) and one of its features is ‘Face Unlock’. You switch the phone on and, to identify yourself, you hold your face up to the screen, blink, and it lets you in. Great.

Except it doesn’t bloody work.

I’m sure in testing it’s great, but for me it fails miserably. I have maybe a 10% success rate. I’ve tried it in the street, in the car (parked, of course), in my bedroom, in the living room, under daylight, under artificial light. Most of the time it simply doesn’t recognise me. For the rest, it can’t seem to see that I’ve blinked as requested (part of the test to make sure you’re alive and not a photo).

Every time it fails, I have to resort back to PIN entry. In fact, it’s clear it was never intended to be entirely successful; when enabling the feature a PIN also has to be set up as a back-up option. Ninety percent of the time this ends up being the primary option, although not after the slight embarrassment of posing for a selfie every time I want to check my mail.

It’s a nice idea, but a failed one. Either make it work reliably or ditch the idea. A halfway option where it may-or-may-not work is a failure: the phone is clearly not working correctly.

We look at the alternatives for securing one’s phone: there’s no lock – easy access for thieves and friends who like to post “funny” updates on your Facebook profile; there’s slide – nearly as ineffective as the above; PIN entry and shape drawing are a reasonable effort but it only takes a couple of looks to know what your friend’s (or potential victim’s) unlock key is. Finally there is the password which is – let’s be honest – the most tedious option around.

Getting authentication right on phones, laptops and other ‘contact’ points is vitally important for the web of trust. As we place more personal information and rights on our devices, so the value of this content and the importance of security increases.

Almost as important is convenience: the ability to pick up a phone and use it without having to solve a challenge or fiddly negotiation of keys every time.

With news that Apple’s newest iPhone 5S includes fingerprint reading, one starts to see a glimmer of hope to this issue. Fingerprint scanners aren’t entirely secure but they’re a damn good start – and from what I read, Apple’s option is a lot more robust than many. Convenience-wise, our fingers are already pretty close to the device already (they’re “to hand” – if you’ll pardon the pun) and somebody would have to take pretty extraordinary measures to forge your fingerprint.

This is one particular feature I’m hoping finds its way onto all manner of phones in the near future. For the good of our mobile security, and for the balance of user convenience, we need to see some real improvements in this area.

I have a lot of things saved in my bookmarks that never see the light of day. Time for some housekeeping! This selection is on the Raspberry Pi – more categories will hopefully come soon

How I shutdown my Raspberry Pi | Claudio Dawson d’Angelis Homepage

http://raspberrycolocation.com/ – Hosting for the Raspberry Pi (€3,- monthly, hosted in Amsterdam)

The Raspberry PI doesn’t have a hardware clock like regular PCs, so we either have to connect it to the Internet (to sync online), attach an external clock or signal receiver, or completely fake it.

This is the faking option: architecture++: fake-hwclock for Arch Linux Arm on Raspberry Pi (using systemd)

Wifi for the Pi

Never got round to doing anything with this, but one day …

Midichlorians in the blood: The MIDI Connection

A 2 pound service charge will be added to bills over 20 pounds.

Is this really a sign of things to come?