There’s a thing going around Facebook about ‘this month has five weekends, it only happens once every 823 years’.

At first glance, it is pretty amazing. The dates line up just right to grant us five whole weekends, including Friday. Bliss. 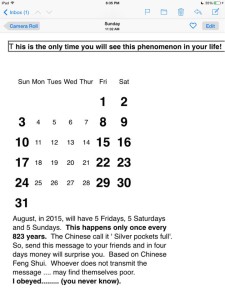 Sadly, it’s rubbish. Or, to put it another way: if you like 5 weekend months, I’ve got good news for you!

The only way a month have even a chance ofÂ five weekends (I’m counting Fri+Sat+Sun) is if it has 31 days. Any shorter, and at least one of those weekends would also be cut short.

That means only January, March, May, July, August, October and December can qualify.

We can also only achieve this ifÂ the first of the month is a Friday, since it’s the only way we can fitÂ all five weekends into a single month.

So, of the seven months of the year that fit the criteria, at least one of those needs to start on a Friday. You’ve seven months; seven days. The odds are pretty good.

Years are pretty regular things. Apart from the small annoyance of February (damn you February) every month is a fixed length – and even the changeable one is predictable.

This is partlyÂ how people manage to tell you the day of the week, given any date in recent history. They don’t memorise each day – it’s systematic.

SoÂ if January is a ‘5 weekend month’ then October of the same year will also be one, provided it’s not a leap year. If it is, then July is also a 5 weekend month.

This affects the probabilities a little, since the dates aren’t truly random, but 66% is a fairly good ballpark for most purposes.

Good news for fans of the weekend

2015 has one month that fits the ‘5 weekend month’ rule: May (not August as the original email suggested).

In 2017 we’ll have to wait until December to celebrate again.

Whatever the outcome, it’s certainly not once every 823 years so don’t worry if you missed it.